Castle Siege (攻城戦) is a starter stage in Super Smash Flash 2 from the Fire Emblem universe and the home stage of Marth. It is directly taken from Super Smash Bros. Brawl.

The stage was first shown in the sole teaser released back in 2008, after this, it was never seen again sans its minor appearances in the mini-trailers and was believed to be cut. It was not until demo v0.9 that Castle Siege, with a new design different from the first showcased, became playable.

Castle Siege has three different forms: the moat of the castle, the throne room, and the underground section, like in Super Smash Bros. Brawl, it teleports into a different form in a sequential order. The terrain on the moat of the castle consists of a platform in the center along with two smaller platforms on both sides of the larger platform. The throne room consists of a flat stage that includes two of the nearest flags that the player can jump on. These flags are located on the left and the right side of the stage. Finally, the underground section consists of a rather long straightforward platform.

This stage is a counterpick in competitive play. With stage hazards disabled, it is a fairly simple two-platform stage. However, the stage itself is somewhat small, the area underneath the left-hand platform is a good camping spot, the edges have lips that can potentially gimp recoveries, and the slope in the center of the stage has some buggy collision issues. Regardless, these faults are not great enough to warrant banning the stage.

Castle Siege bares no exact resemblance to any place in particular in the Fire Emblem series. Rather, it is based on the theme and the series as a whole. The title of the stage comes upon the fact that the main objective throughout most of the Fire Emblem series was to seize a castle. The castle itself is based on various other castles in the series.

Marth hitting Sheik with the tip of his forward smash.

Meta Knight and Kirby in the air.

The stage transitioning with Ichigo firing a Getsuga Tenshō at Ness.

Mario and Mega Man in the throne room.

Castle Siege, as it appeared in the first Smash Flash DOJO!!! in early 2008. 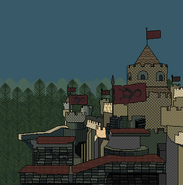 Castle Siege's second early design, the only difference between this and the new one is the background, looking more detailed now.