Casino Night Zone (カジノナイト) is a starter stage in Super Smash Flash 2 and is one of the three stages representing the Sonic universe along with Green Hill Zone and Sky Sanctuary Zone.

This stage is banned in competitive play. With hazards enabled, the bumpers make it more difficult to score KOs, as they can be used to recover back onto the stage. Standing underneath the bumpers on the left or right sides of the stage can allow infinite chaingrabs, especially when up throw is used. Even with hazards disabled, the stage is still banned. The floating platforms are very far offstage, creating both powerful camping zones and allowing characters with bad offstage games to greatly extend their reach when edgeguarding. The main platform is designed in such a way that encourages campy play by making it more difficult to approach.

The Casino Night Zone is the fourth level of Sonic the Hedgehog 2, after Aquatic Ruin Zone and before Hill Top Zone. As with most other stages in this game, Casino Night Zone consists of two standard Acts with a boss fight at the end of Act 2.

Casino Night is a sprawling nighttime casino, with jaunty electric colors, pinball flippers and slot machines abound. The level also features elevators, which convey Sonic upwards or downwards depending on the specific lift.

Lloyd, Sonic, Rayman, and Wario standing on the stage.

Mega Man being meteor smashed by the bumper.

Bomberman taunting next to Pichu and Pikachu, while they all stand next to the slot machine. 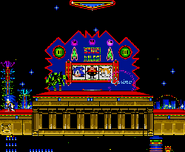 Sonic standing on the platform to the left of the slot machine. 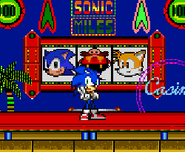 Sonic taunting in front of the slot machine. 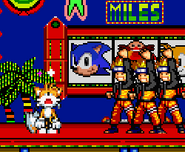 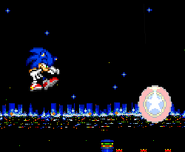 Sonic being bounced back by the stage's upper left bumper. 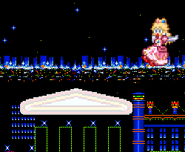 Peach being bounced back by the stage's bottom bumper.

Donkey Kong being meteor smashed by the bumper.