The Capsule is a simple item that requires a single attack or get thrown, to release the single item found inside. Throwing the capsule at any opponents, delivers 9% damage, though there is a 1-in-8 chance that the Capsule will explode instead, dealing 23% damage and great knockback.

The capsule next to Lucario on Polygon Zone.

The Home-Run Bat released after Bomberman throwing a capsule at Samus on Clock Town.

The Capsule being broken. 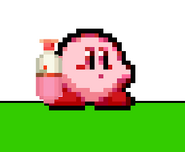 Mario crouching while holding a Capsule on Final Destination.

Mario surrounded by lots of items released from Capsules.