McLeodGaming Wiki
Register
Don't have an account?
Sign In
Advertisement
in: Attacks, Special moves, Side special moves,
and 7 more

This article is about Mario's side special move in Super Smash Flash 2. For the twenty-ninth level in Yeah Jam Fury: U, Me, Everybody!, see Cape (level).

When performed, Mario pulls out his yellow cape and swipes it in front of him before putting it away. If the cape makes contact with an opponent when swiped, it switches the direction that the opponent is facing and deals 8% damage and slight knockback to them, but with no flinch. The cape can also reflect projectiles if timed correctly.

Additionally, using Cape in the air will slightly lift Mario into the air for a moment without compromising much horizontal momentum, which can benefit Mario's horizontal recovery. Using Cape after dashing will cause Mario to slide a little bit.

The Cape Glide, also known as CG or aerial cape extension, is an advanced technique in SSF2 which Mario could also perform in Super Smash Bros. Brawl. To do this, the user must dash off a ledge and perform Cape a few frames before Mario as about to run off of it, causing him to "glide" a long distance off the ledge. Mistiming it will have Mario only stop by the ledge and be able to grab it, or he will perform an aerial Cape. This technique is useful for mindgames, mobility and edgeguarding. The player can also use this technique to save Mario's midair jump when gliding and use any aerial attack after it ends. When Mario performs this technique, the effects of Cape last throughout the glide.

The Cape Dash, also known as the reverse Cape Glide, is a technique that allows Mario to perform the Cape Glide on stage. To perform this, the player must use Cape in the same way with the same timing as with Cape Glide, but instead of moving forward, they must turn around just as they are about to run off the ledge. This will make Mario perform a Cape Glide on-stage. This is good for setting up mindgames against opponents.

Originating from Super Mario World, the Cape is obtained from a power-up called the Cape Feather. It enables both Mario and Luigi to spin and attack with it (although Mario did not hold the cape in his hand during the spin attack, as he does in SSF2 and the Super Smash Bros. games), as well as to jump and fly great distances after a running start. Mario did not "fly", rather, but "glide", but he could do so indefinitely by diving and pulling up in a certain rhythm, and while gliding he could slam into the ground to create an earthquake capable of damaging all enemies on the screen. This, of course, is not present in SSF2.

Mario about to use Cape on Mushroom Kingdom III. 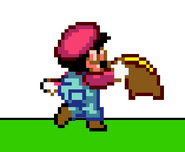 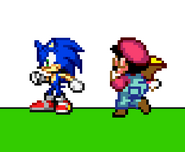