The Bumper is a throwable round knob that bares a yellow Super Smash Bros. symbol on its top, with a bouncing blue ring at the bottom. After being thrown, the Bumper will create an additional obstacle on the stage and, depending where it was launched, it may remain airborne or stick on the floor. Anything that collides with the Bumper after being set will trigger the bouncing ring and will bounce off it. Depending on how the set Bumper was approached, it may launch back the character at multiple different directions. For example, approaching the Bumper from below may meteor smash the character back, this makes it an ideal tool for edgeguarding. Unlike any of its appearances in the Super Smash Bros. games, the Bumper deals no damage, neither when thrown directly at an opponent (as in Super Smash Bros. Brawl onwards), nor by coming in contact with it (as in the original Super Smash Bros.). SSF2 notably features both the Bumper and the Flipper in the same game, after they were items that replaced each other in the official Smash Bros. games.

As noted by its description in the item switch, the Bumper originates from real-life bumpers from pinball machines as opposed to an actual video game entry. Bumpers serves as obstacles that actively push the ball away. They are operated by a switch connected to a ring surrounding the bottom circumference of the bumper that is suspended several millimeters above the playfield surface. When the ball rolls over this ring and forces one side of it down, a switch is closed that activates the bumper's solenoid. This pulls down a tapered ring surrounding the central post of the bumper that pushes downward and outward on the ball, propelling it away in the same way the item does for SSF2.

The Bumper next to Waluigi on Polygon Zone.

The Bumper knocking Sonic back on Casino Night Zone. 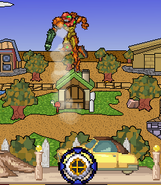 Wario next to a bumper in the ground on Mushroom Kingdom III.

Tails being knocked away by a bumper on Mushroom Kingdom III.

Wario and Tails being knocked away by bumpers on Mushroom Kingdom III.