Break the Targets, also called Target Test and formerly called Target Smash, is a game mode present in the Super Smash Flash games based on the game mode of the same name from the Super Smash Bros. series. The goal of the game is to break a set of targets as quickly as possible. The game records the lowest time taken to destroy all the targets with each character. If a player fails to break all the targets, no time will be recorded.

In the original Super Smash Flash, Target Test is one of the two game modes featured in Stadium, as well as one of the two bonus levels in both Classic and Adventure. It tasks the player to break eight targets spread throughout the Kirby Hub Room, and each character has their own unique pattern for targets. This occasionally requires the use of the characters' unique abilities to break certain targets, such as Mega Man X having to use a projectile attack at least once to break an otherwise unreachable target.

Clearing Target Test with every other character will unlock Mr. Game & Watch.

In Super Smash Flash 2, the mode has been renamed to "Break the Targets" and plays similarly to its previous iteration, except the player now has to break ten targets. There are five stages to choose from, one of which changes depending on the character selected. Like before, Break the Targets is the first of two bonus rounds that appear during Classic, where it is stylized as "Break the Targets!", and the first four levels also appear in event #18: Target Race.

A simple course consisting of seven platforms, with six of them being soft platforms and one being a hard platform. The stage also contains a wall to the left side of the highest platform. The targets are teal in color.

A nightmare-themed course consisting of ten hard platforms of varying shapes, some of which contain slopes. The targets are grey in color.

A machinery pinball-themed course consisting of four hard platforms, one soft platform, three springs, two flippers, and a conveyor belt moving right. Landing on a flipper or spring will bounce the player into the air, with the rightmost spring bouncing them to the top of the stage. The stage also has walls extending to a ceiling, making it so the player is unable to self-destruct. The targets are green in color.

A basement-themed course consisting of four hard platforms and two soft platforms. Unlike in the previous three levels, the targets move quickly in a set path. The targets are orange in color.

Each character in the game is planned to have a unique Break the Targets stage with a distinct layout and aesthetic. These stages utilize the unique abilities of each character and often feature visual designs based on their home series. The targets are red in color with the character's series symbol in the center, which is also present in the background. 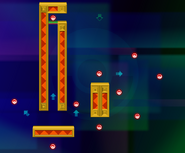 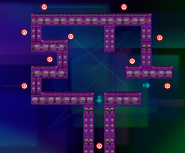 Blade about to hit a target on Target Test.

Mario breaking a target on Level 1.

Sora breaking a target on Level 2. 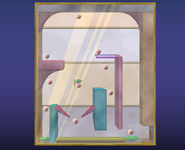 Bomberman breaking a target on Level 3.