Bob-omb, known in Japan as Bomuhei (ボム兵) is a walking living bomb enemy that has appeared all along the Mario series which appears as an item in both games of the Super Smash Flash series.

Bob-omb has two white eyes, a fuse, two legs, and usually has a wind-up mechanism on its back. The mechanism is not required to make the Bob-omb work, however.

It is one of the many throw-able items featured in Super Smash Flash. When thrown, it has huge knockback, and causes a lot of damage. Because of SSFs damage set and physics, a flaw may cause more than 1000% of damage to occur if a player throws a Bob-omb at a chain of, either, other Bob-ombs or activated Motion-Sensor Bombs with another player standing on them without offering any knockback.

Bob-omb is upgraded in Super Smash Flash 2 to work very similar to its Super Smash Bros. series' counterpart, where it appears as a dangerous item that can be picked up and thrown, they have a small yet powerful explosion on contact. Unlike SSF, if it is left alone for too long, however, it will light its own fuse and start walking around, blowing up when someone touches it, either directly or indirectly, or after a 15 seconds pass. Attacking or hitting the Bob-omb makes it explode instantly so players must be careful. It can do up to 27% of damage.

Bob-omb originally appeared in the non-Mario game Yume Kōjō: Doki Doki Panic under the name Bob (ボブ), with it later being renamed to Bob-omb in the game's localization in North America and Europe as Super Mario Bros. 2. It appears as an enemy dropped by the Albatoss (トンドル) enemy, eventually exploding on its own. Even since its debut, the player could pick and throw Bob-ombs to their advantage, such as using their explosion to defeat other enemies or destroy walls, though the explosion itself is also harmful for the player. Bob-ombs have since become recurring enemies in the Super Mario platforming series, now serving under Bowser's Koopa Troop. They have also become common explosive items in the Mario spin-offs, most notably in the Mario Kart series.

Bob-omb next to Wario in the air on Saturn Valley.

Bowser throws a Bob-omb to Wario on Hylian Skies.

The Bob-omb is sitting on Waiting Room.

The Bob-omb is starting to walking around the platform.

The Bob-omb is about to explode.

Bob-omb's third early design for SSF2 Beta, with different a coloration that was never released to public. 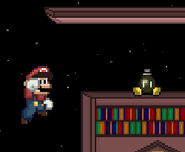 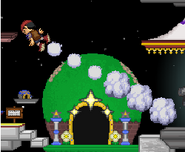 Ness blown away by the Bob-omb on Galaxy Tours. 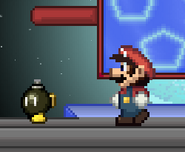 The Bob-omb walking on its own. 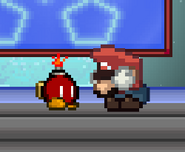 Bob-omb to explode with Mario.

Bob-omb's old coloration alongside other items.
Community content is available under CC-BY-SA unless otherwise noted.
Advertisement