The Blast Box (爆薬箱), is a heavy item that appears in Super Smash Flash 2. It is notably the only explosive-type item in the game.

The appearance of the Blast Box is that of a wooden crate with a fire hazard warning label pasted in the front of it. The crate can be hit multiple times before it explodes while it will explode instantly when hit by a flame attack. When hit, it will slide across the stage. When a character is hit by the explosion, they will receive a ton of knockback.

Mario with a Blast Box near him.

Mario and Bowser near a Blast Box.

Mario using Fireball to explode the Blast Box behind Wario on Emerald Cave. 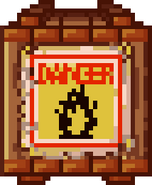 Mario and Captain Falcon near a Blast Box.

Mario hits the Blast Box to Captain Falcon, who hits it with a Falcon Punch, causing it to explode.
Community content is available under CC-BY-SA unless otherwise noted.
Advertisement