This article is about Black Mage's appearance in Super Smash Flash 2. For general information about the character, see Black Mage.

Black Mage is a newcomer starter character in Super Smash Flash 2. Black Mage is the first bonus character to appear in SSF2, as his appearance was not slated for the game's initial planification. His sprites are custom-made and based on his appearance in FINAL FANTASY. He mainly uses devastating black magic to combat his opponents, but as an extra, he also uses Blue Magic, as seen in his "Goblin Punch" and "Chocobo Kick" attacks.

Black Mage is ranked 34th out of 47 characters on the tier list, an improvement over the 39th spot out of 40 in the previous tier list. Black Mage is one of the best edgeguarders in the game due to the large variety of tools he can use to cover almost any attempt to guard break him. He has good range with several disjointed attacks, powerful combos a solid aerial game, including an excellent damage-racking option in his neutral aerial, and a very strong grab game; he also possesses a command grab with a large range that can hit most downed opponents, and a variety of KO moves in his forward smash, up smash, dash attack, back aerial, down aerial (when the meteor smash is active), forward and back throws and Haste. Black Mage has the unique ability to change the form of his smash attacks by fully charging them, effectively increasing their range and even turning two of them into projectiles. Lastly, he can use Stop to stop the opponent in place for a while, making them vulnerable to kill-confirms, and even reflect a projectile.

However, Black Mage has a rather weak neutral game due to his over-reliance on forward aerial, forward tilt, forward smash, and back aerial. Similarly, most of his finishers are rather slow and his combos, while dealing a lot of damage, are easy to drop, giving him a steeper learning curve due to a greater emphasis on precision and reading the opponent. Black Mage has only average mobility overall, allowing faster characters such as Captain Falcon and Fox to outpace him. Moreover, he has difficulty fighting against characters with greater reach than his or those possessing lots of disjointed hitboxes that outrange him, such as Lloyd and Donkey Kong. Black Mage is also brought down by his recovery, which covers a long distance, but is very predictable and easy to gimp, as he is effectively open to attacks until he gets his teleport into place. He also has below average accelerated falling speed, which allows him to be KO'd vertically early.

Though his strengths are not to be underestimated, his learning curve is steep and only players who have truly mastered the character can use him effectively. Black Mage's array of problems have only become increasingly more apparent as the meta has developed. He also has disadvantageous matchups against most of the higher-ranked characters, keeping him out of higher tiers.

Black Mage uses devastating black magic in his attacks. Black Mage is a medium-weight character with below average accelerated falling speed, who has good range in most of his attacks with many of them having disjointed range. He has KO moves in his forward and up smash, dash attack (which grants him Super Armor), forward throw, back throw, back air, down air, and Haste. His fully-charged smash attacks cover great distances, for instance, his down smash makes it difficult for opponents to land or can force them into the air or into shield, setting them up to be grabbed or walled out with forward aerials; his forward smash is a large projectileand is great for making it difficult for opponents to recover, as well as also being an outstanding kill move and combo tool; as for his up smash, it has great potential to KO opponents early off the ceiling of the stage and has impressive vertical range that can even hit opponents on the top platforms of Battlefield or Galaxy Tours. Black Mage has good priority and reach in his aerials giving him a solid aerial game with his neutral aerial being an outstanding combo starter, forward aerial being a good combo extender and approach tool, back aerial being an excellent combo extender and kill move, up aerial being useful for juggles, and down aerial having great potential to kill opponents early especially when sweetspotted

Black Mage is one of the best edgeguarders in the game and his guard is hard to break. Black Mage can use Stop to freeze and reflect projectiles giving him a way to nullify most characters projectile camping; it also paralyzes his opponents who come in contact leaving them open(depending on how long stop has been charged). Ironically, he himself also suffers from being easy to edgeguard, and being offstage is a very disadvantageous position for Black Mage to be in especially against characters with great edge games such as Lloyd.

Black Mage has a good grab game, despite possessing the seventh shortest grab in the current demo. His down throw can potentially chain into itself and set up tech chases, two kill throws in his forward throw and back throw, and his up throw being a good combo starter; he also possesses a command grab with a large range that can hit most downed opponents. He is also able to chain grab with his down throw at low percents and can allow him to rack up a lot of damage on his opponent. His up throw can be a good combo starter. His forward and back throw can kill at high percentages and his forward throw can set up his excellent edge guarding ability.

However, Black Mage suffers from average mobility which allows characters with better mobility to rush him down. (ex. Captain Falcon and Fox). Even with having a pseudo wavedash; due to Black Mage's high traction it is very short and not very useful for mobility.

Warp, although giving him a long recovery, is easily predictable because the opponent knows where he is going to land based on the green circle, and can punish him easily for recovering.

He has problems dealing with characters who can really camp him out and Stop can only reflect one projectile on one side at a time. A prime example of this would be Fox's Blaster; Fox's Blaster is fast, can be spammed, covers a good distance and does not make the opponent flinch so even when reflected it will not deter Fox from projectile camping Black Mage. Also combined with his poor mobility gives him less options on how to prevent camping.

Black Mage also has low accelerated falling speed, which makes him more susceptible to getting KO'd off the top boundary than most characters. He also has problems dealing with characters who posses better range and high priority attacks.

Black Mage has received a mix of buffs and nerfs. Black Mage benefits from the lower hitstun due to being less susceptible to combos while being able to combo like last demo. Black Mage is seen as a more effective character.

Initially, Black Mage was considered to be the best character in the game upon his introduction in demo v0.7, due to his disproportionately strong attacks and high kill power. However, in the weeks that followed, he was severely nerfed, causing him to fall to the bottom of the tier list. In demo v0.9a, he finally crawled out of the low tiers due to a number of buffs he received. In demo v0.9b, he was initially seen as a very strong character, placing 8th overall. However, as the meta progressed, his flaws became increasingly more visible, causing him to fall six places, from the top to the bottom of A tier.

In Super Smash Flash 2 Beta, Black Mage has fallen from his place as a mid-tier character from 0.9b, now ranking 31st on the tier list out of 39, placing him in the middle of C+ tier just above Sonic and Bandana Dee and being a low-tier. Despite the buffs he received, Black Mage is still hindered by the changes to the metagame, and later falls 39th out of 40 characters, causing him to be a bottom tier character again. In the 1.3.0 tier list, with new characters in the game, Black Mage rose to 34th, going from the second worst character to the bottom part of the mid tier.

Black Mage performing his forward smash on Luigi while dodging on Emerald Cave.

Black Mage performing his down smash on Chaos Shrine.

Black Mage standing next to Link on Hylian Skies.

Black Mage and White Mage next to Kirby on Chaos Shrine. 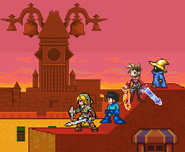 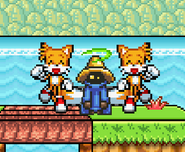 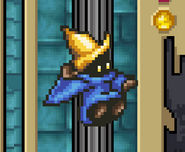 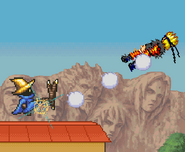