McLeodGaming Wiki
Register
Don't have an account?
Sign In
Advertisement
in: Enemies, Enemies in Super Smash Flash 2, Characters,
and 7 more

Birdo (キャサリン) is a recurring character in the Mario series.

Birdo's first appearance in Super Mario Bros. 2 from NES. In fact, there have been multiple characters known as "Birdo", similar to the multiple Yoshi that have appeared throughout history. The concept of a Birdo character was not solidified until the same pink Birdo began appearing in various spin-off titles. The central Birdo character (that appears in the Mario Kart series, the Mario Party series and the various sports titles) wears a red bow and a diamond ring. She also has some sort of relationship with Yoshi, as they are the automatic partners in various competitions. The reason for this color pink is for contrast Yoshi's color. She also is a good friend of Daisy, Toadette, and Petey Piranha. Other Birdo characters have resided in Subcon, in Nimbus Land, and in other locales.

Birdo appears in Super Smash Flash 2 as a stage hazard on the stage Mushroom Kingdom II. As she does in Super Smash Bros. Melee, she walks out from the edges of the stage shooting eggs in a straight line from her snout. These eggs damage players on their path.

Birdo shooting an egg at Luigi. 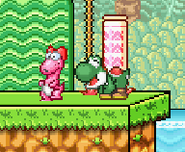