The Beam Rod (ビームロッド) is an item in Super Smash Flash 2 that acts as the polar opposite of the Star Rod.

The Beam Rod can be considered the polar opposite of the aforementioned Star Rod. Whereas the latter is capable of shooting long-ranged big star-projectiles that hit strong enough even if directly hit with the Rod itself, the Beam Rod on the other hand proves to be a weaker variant that shoots short-ranged small star-projectiles that briefly stuns opponents and deals 3% of damage, while dealing little knockback. Swinging a smash attack with it, creates a forking that launches the small stars is three directions while also increasing the range a bit. The Beam Rod never runs out of ammo, unlike the Star Rod.

The Beam Rod is based on the Beam ability Kirby is able to receive in the Kirby games. This is the first and most common copy ability Kirby receives. The form debuted, alongside Kirby's copy abilities, in Kirby's Adventure where Kirby projects the beam with his hand; beginning with Kirby Super Star, he instead uses a rod, which is source of inspiration for the item. The overall appearance of the rod, on the other hand, comes from the more recent game, Kirby's Return to Dream Land. Unlike its SSF2 counterpart where it stuns the opponent, in the Kirby games, the beam ability is electric-based.

Mario with a Beam Rod fights with Bowser on Bowser's Castle. 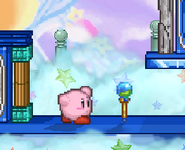 Kirby next to the Beam Rod.