This article is about Bandana Dee's appearance in Super Smash Flash 2. For general information about the character, see Bandana Dee.

Bandana Dee is a newcomer starter character in Super Smash Flash 2 who was revealed during the Day 3 stream at Super Smash Con 2016. He hails from the Kirby series and, like PAC-MAN, is a character who originally appeared as an Assist Trophy. He uses custom sprites made primarily by Steven based on his appearance since Kirby's Return to Dream Land.

Bandana Dee is ranked 36th on the current tier list, putting him at the top of C tier. Bandana Dee's most notable strength is his great combo game, with great combo starters, a good grab, and very useful throws. He also has a decent edgeguarding game, three midair jumps, and a great spike in his down air.

However, he suffers from a severe lack of kill power, with his main KO moves being hard to land due to moderate starting lag and often relying on hard reads to pick up the KO. He is also harmed by low mobility, especially in the air, where his low air speed and midair jump height make him one of the slowest characters there. He also struggles greatly with his very low endurance, as his status as a lightweight and extreme floatieness combined with his abysmal recovery which relies on his double jumps and low-distanced recovery makes him incredibly easy to KO. Though many of his attacks are multi-hits, some of them have significantly hampered utility due to not connecting reliably into the final hit.

Overall, Bandana Dee's strengths are mostly overshadowed by his drawbacks and this leaves him as a low-tier character.

Bandana Dee is a unique character; he is a slow, floaty featherweight similarly to Kirby; however, unlike Kirby, his spear gives him a massive disjoint. This allows him to compensate somewhat for his slow vertical and horizontal mobility (especially in the air) by effectively spacing out foes with long-reaching tilts and aerials. He has three midair jumps, albeit very short-distanced, and a decent horizontal recovery move in Waddle Copter.

He has very potent combo starters in dash attack, up tilt, down tilt, down throw, and up throw. He can continue his combos with his good aerials, and finish a combo with a back aerial or Waddle Copter. This gives him a versatile combo game that allows him to string together attacks for lots of damage. He also has solid frame data on most attacks, with examples of fast moves being up tilt, Waddle Copter, and back aerial, two of which are good finishers.

His grab game is also very versatile: his down throw is a solid combo starter that can chain grab fast fallers at low percents and KO at high percents. His up throw can reliably start aerial combos at low to mid percent, and forward throw can start combos at low percents and can force a sacrificial KO. His back throw is guaranteed to put the foe into a bad position, by either forcing them to recover low (which can easily lead into a down aerial) or forcing them into a tech chase scenario. His grab range is also surprisingly high, extending the distance of his entire body. He also has a very fast pummel, and can therefore rack up damage quickly while resetting his stale moves.

His special moveset gives him a variety of options to use: Beam Whip, his standard special move, can function as an interruption tool, and it can be charged to become Wave Beam, a quick moving projectile useful for gimping characters with weak recoveries. His side special, Spear Throw, can function as a useful gimping tool as well, and pins the opponent in place for a short while, allowing Bandana Dee to follow up. Waddle Copter, his up special, is a respectably powerful attack, and can be used to provide impressive horizontal recovery. Finally, his down special, Parasol Drill, can function as a mobility and approach option, and deals respectable knockback

However, Bandana Dee's main issue is his KO potential; despite having several solid finishers, he struggles to pick up early KOs, as none of his highest knockback moves have KO potential on middleweights under 100%, and his main KO moves either are hard to land (back aerial and Waddle Copter), are slow (smash attacks), or simply aren't reliable finishers until very high percents (down throw). Although his grab and combo games are outstanding at low to mid percents, this is not true at high percents, as Bandana Dee cannot reliably get KO confirms without platforms at any percent, despite having a myriad of combo starters. This lack of KO potential can force Bandana Dee to rely on hard reads or edgeguarding to take a stock; however, the latter is made extremely risky by his recovery, or lack thereof.

His specials are also very easy to counteract if met with the proper reaction; Beam Whip by itself is very weak, and does not have any use outside of interrupting approaches, and Wave Beam can be easily avoided and reflected. Spear Throw is very weak, its overall distance is very short, and opponents can easily escape the pin, making it unreliable for followups. Waddle Copter is also easily avoided, and it can be very weak on characters with a high weight or falling speed. Lastly, the aerial version of Parasol Drill, Parasol Dive, is much weaker than the grounded version, making it less reliable for KOing despite its downward launch trajectory, and the grounded version can be easily avoided as well.

His recovery is very linear and very easily predicted; his low air speed gives him a hard time making it back to the stage quickly, his jumps are short-distanced, and despite Waddle Copter's decent horizontal distance, it is one of the worst vertical recovery moves in the game and easy to intercept, meaning his vertical recovery is one of the worst. He also has rather unimpressive endurance, as he is extremely light (even lighter than Kirby) and has low gravity, giving him not only very poor vertical endurance, but worse horizontal endurance than characters of a similar weight class due to has abysmal recovery.

Overall, Bandana Dee is a mediocre character with good strengths but is held back strongly by his lack of mobility, recovery, and KO potential. He can function well with a bait-and punish playstyle, as his KO moves deal good knockback and are useful for punishing. He can also play defensively and zone out opponents with his Wave Beam, Spear Throw, and long-ranged attacks, and stall with his multiple jumps.

In the most recent patch that changed Bandana Dee, Beta 1.2.2, Bandana Dee had his range noticeably buffed. His down tilt, back aerial, and grab all have new animations with much more range, which most notably makes his powerful back aerial much easier to land and gives him a surprisingly long grab, with a range similar to that of Marth.

Bandana Dee has always been a low-mid-tier character. His debut on the tier list, the Beta 1.0.2 tier list, placed him at number 33 out of 39, at the bottom of the C+ tier and as the 7th worst character in the game. This was due to his crippling lack of recovery and KO power. However, the latter was somewhat remedied by Beta 1.0.3.2, as it made Waddle Copter a powerful KO move, and he jumped up 7 spots on the tier list due to this change and his excellent combo game being advanced, placing him at the top of C tier, at number 26. However, he later dropped back down to number 34, where he remains today. 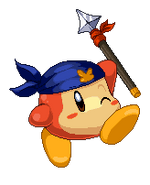 Bandana Dee performing his forward smash while Black Mage is using his up aerial on Gangplank Galleon.

Bandana Dee using his down aerial against Wario on Hylian Skies.