This article is about the summoning item in Super Smash Flash 2. For the collectible item, see Trophy. For the summonable characters in Fraymakers, see Assist.

An Assist Trophy (アシストフィギュア) is an item in Super Smash Flash 2 that, when grabbed, summons a random non-playable character to aid the player who summoned it.

Assist Trophies work nearly identical to Poké Balls. However, no Pokémon come out of them, and once an Assist Trophy is grabbed, it is automatically activated, assuming the holder is standing on the ground, and not in a jump, attack or hitstun animation. Basically they are "guest" characters separate from the playable roster. The majority of Assist Trophies in SSF2 are undamageable, with only Metroid, Mother Brain and Starfy being able to be interrupted or otherwise hit.

These are the characters that can be summoned from Assist Trophies:

An Assist Trophy centered between Sora and Black Mage on Waiting Room.

Mario after getting an Assist Trophy. 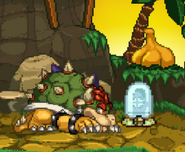 Bowser crouching next to an Assist Trophy on Jungle Hijinx.