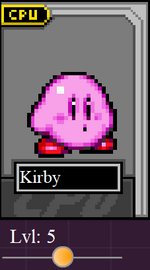 Artificial intelligence, abbreviated as AI, is the intelligence of a computer-controlled character (referred to as a computer player, or CPU) in the Super Smash Flash series. The level of intelligence ranges from 1 to 9, with 1 being the lowest and 9 being the highest. The higher the level, the faster and more likely the CPU will react and attack, creating the illusion of skill.

The default artificial intelligence level, in both games, is level 1. As mentioned, the CPU levels affect the reaction speed and creates an illusion of more skill — both a level 1 and a level 9 AI will decide to do something such as input an attack, but the level 1 will almost never do so, waiting for a long time before eventually doing it, while the level 9 will probably do it instantly.

Likewise, lower level CPUs are unlikely to shield or dodge an attack, using rolls simply to reposition themselves in some instances, and almost never using their shield at all. Unlike low level CPUs, level 9 CPUs are able to perfectly land attacks against opponents when at the appropriate range from them, and sometimes, albeit still rarely, will manage to do an effective combo.

Players commonly fight against CPUs to train when there are not other players around to play. This is a practice that is criticized by some, as besides even the highest level CPUs being of a lower level of skill than a typical casual player, CPUs do things that human players never do (and will never do things that are common for human players to do), as well as having several exploitable flaws and being completely incapable of mind gaming, or even learning from their mistakes and changing their tactics accordingly.

Training against CPUs is said to not adequately train one's skills beyond basic offense and defense (such as the ability to read and bait opponents), and it is often argued that excessive CPU training may cause a player to actually become slightly worse by developing habits that only work against CPUs and will be heavily exploited by human players. For example, if a Marth player persistently used Counter as a CPU got close to attack, it would fall for it most of the time especially at higher levels, without trying to instead bait the counter or use grabs more often, using even powerful attacks that might result in the CPU being fatally KO'd when countered. However, a competent human player would easily avoid the move by feigning an attack in the cases where Marth would commonly use Counter, and then punish him with a grab or delayed powerful attack such as a charged smash attack.