Amigo (アミーゴ) is the main character of the rhythm game, Samba de Amigo. He is an orange monkey that likes to dance and play with his maracas. Amigo originally appeared in Super Smash Flash 2 as an Assist Trophy before getting removed in the Beta version of the demo, as the developers felt he was increasingly buggy and difficult to maintain, in addition to many players finding his effect annoying.[1]

Amigo is the character conceived for SEGA's rhythm game, Samba de Amigo. The game poses a vast list of Brazilian rhythms. "Amigo", the Portuguese word for friend, was most likely used as the name of the main character to represent his friendly attitude.

Amigo is a monkey dressed in stereotypical Mexican attire who dreams of being a great maraca player. He is hyperactive and can get so caught up in the Brazilian rhythm that he cannot stop shaking his maracas. His favorite food is baked bananas, a specialty of his hometown. He is very talented in music but not very smart.

Besides being the star from Samba de Amigo, he is also a regular character in the SEGA mascot lineup, appearing alongside Sonic the Hedgehog in many SEGA spin-offs such as Sega Superstars Tennis and Sonic & Sega All-Stars Racing, as well as many cameo appearances.

Amigo was originally one of the multiple Assist Trophies that could be summoned in Super Smash Flash 2. Upon being summoned, he would be accompanied by two amplifiers, three balloons, and two cacti dressed in stereotypical Mexican attire. He would then begin dancing while causing all grounded opponents to taunt uncontrollably, rendering them vulnerable to attacks. Amigo played his "signature song", Samba de Janeiro while he was in a match.

Opponents would be able to break free from taunting in multiple ways. Shielding, charging an attack, or being in the air would prevent opponents from being affected by Amigo, so players would be able to act for as long as they do so. Additionally, any affected player would have two frames worth of time between taunts to make an action before the taunting resumed. 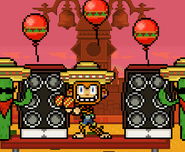 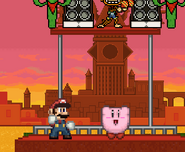 Mario standing, while Kirby taunts, due to Amigo's effect. 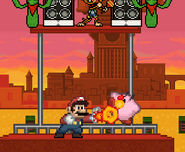 Jigglypuff summoning Amigo while Naruto is in the air on Dream Land.

Naruto being affected by Amigo while Jigglypuff tries to attack him with its forward smash.