Adventure Mode: The Flash Of Shadows

Adventure Mode: The Flash Of Shadows, abbreviated as FoS, was the planned downloadable "story mode" extension for the downloadable version of Super Smash Flash 2. Based on The Subspace Emissary from Super Smash Bros. Brawl, it would have consisted of various levels in the style of a side-scrolling platformer in which the player must reach the end of each level while fighting enemies and bosses. Additionally, a story would have been told through pre-rendered cutscenes during and between levels. The story had been developed by several of the game's developers known internally as "The Flash Of Shadows Writers", led by Suliboy. The story was planned to be about a group of heroes' struggle to defeat a "Shadowy Man" known as Umbra, along with their army of minions known as the CuBots. Characters would join the player's party according to the story, and allowing unlockable characters to join the party would unlock them.

Due to changes in the development team in late 2010 following the release of v0.6 of the demo, the current story was deemed absurd and obsolete, being scrapped altogether, and the mode itself was quietly scrapped shortly after. On March 23, 2018, developer James Hadden confirmed in an interview that a story mode is now highly unlikely, albeit still possible, to be created for SSF2 in the future.[1] 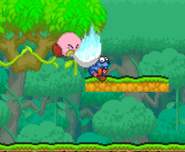 Kirby using Final Cutter on a Gnawty on a jungle level. 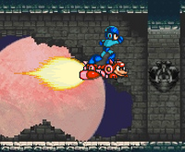 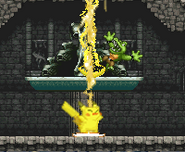 Pikachu using Thunder on a Kritter on a castle level.

As previously mentioned, a story would have been told in this mode through pre-rendered cutscenes during and between levels. Of these cutscenes, three have been shown and released to McLeodGaming's YouTube channel, although they are now private. Note that these cutscenes are all depreciated and based on the original story for this mode, which is now scrapped. Also note that changes have been made to the game's character roster following the release of v0.7, with Vegeta IV now removed and Zero and Solid Snake now unconfirmed, and these cutscenes reflect only the initial roster.