Adventure, more commonly called Adventure mode, is a 1-P game mode in Super Smash Flash, along with Classic and All-Star modes. This mode is very similar to the aforementioned Classic, though it includes platforming segments between each of the fights. Also, in addition to Master Hand, the player will also have to face its left counterpart Crazy Hand at the culminating fight.

Clearing Adventure with a specific character or under a specific difficulty will reward the player in a certain way if the conditions were met.

Though at one point Adventure mode was confirmed to re-appear in Super Smash Flash 2[1], there is very little information besides some outdated posts that appeared on early Smash Flash DOJO!!! pages before the latter closure and renovation.

Adventure in Super Smash Flash is essentially a clone of Classic, containing the same amount of levels, the same bonus rounds and a similar final boss fight. They differ in that Adventure poses side-scrolling levels not seen in Classic, in addition that one of the bonus rounds is harder than the one found in the latter.

It was initially confirmed that Super Smash Flash 2, like Super Smash Flash, would include an Adventure game mode based on Super Smash Bros. Melee. According to the DOJO!!! update, each level or world is represented as a mini-planet themed with an associated SSF2-in game universe, such as a Mushroom Kingdom mini-planet from the Mario series, which would have served as the first level of Adventure. With that being said, this information is outdated, so it may not reflect what actually appears in the final game. 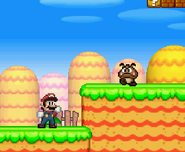 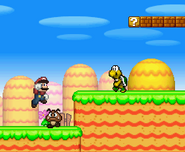 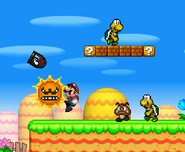